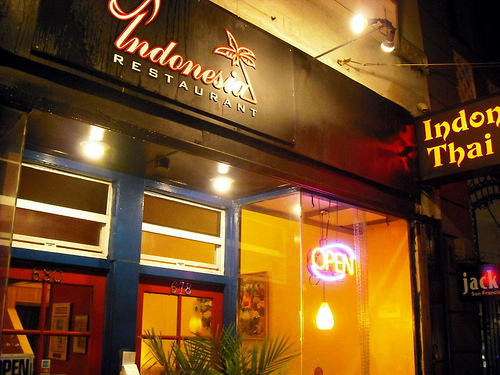 Another rainy night, and another dinner with Sarah, so Indonesia Restaurant was another choice of convenience, born out of the desire to stay as dry as possible.  I put on a dress and boots because I figured that was the best rain gear I could put together, boots would keep my feet dry and I wouldn’t have heavy jeans soaking up every drop of water.  It turned out to be a pretty good plan, except the under-skirt slip thingy rode up and made for an uncomfortable skulk to the bathroom to adjust myself, where I accidentally opened the door on somebody.  But I’m getting ahead of myself a bit.

Sarah had gone to Walgreens before we met and her bag had gotten really wet in the rain, so she asked the waiter who’d seated us for a plastic bag to carry it in, and he very nicely gave her one.  We talked about how the bag could be turned into an awesome tank top very easily, just a few quick cuts.  So look out for that next big fashion thing.

Sarah also thought I should document the hot-kid honey ball cookies she bought at Walgreens and the elegantly folded napkins at the restaurant, so here we are.

The menu is split into Indonesian and Thai sections.   I guess this used to be a solely Indonesian restaurant, but sometime in the recent past they became a Thai restaurant as well.  It’s my understanding that this space has been through many incarnations of Indonesian restaurants of some kind.  Anyway, we ordered mostly from the Indonesian side.  We started off with perkedel,

which was a soft beef and potato cake sort of thing.  It was not like anything I’ve had before, when we ordered it I was expecting something more like a dumpling, but this was like a fish cake or a dry meatball.  Not my favorite ever, but it wasn’t bad.  I probably wouldn’t be in a hurry to order it again though.

I ordered the veggie fried rice with anchovies.  It was pretty good, there were a lot of vegetables in it and not just frozen carrot cubes and peas, there were green beans and peppers and some sort of leafy green.  The anchovies were a tad too salty for me though. 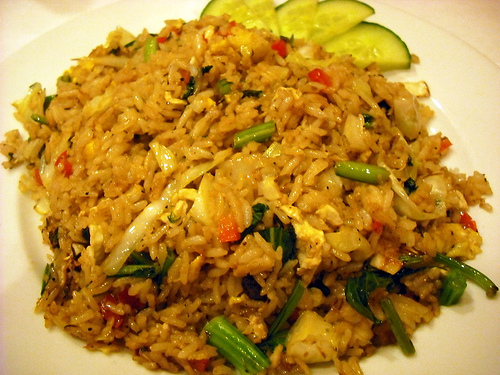 It looked really pretty though.  Indonesia was pretty big on presentation.

Sarah ordered some sort of coconut milk curry chicken soup.  I can’t remember what it was called, and I’m having trouble finding the menu we ordered from online.  Maybe they’ve changed things up again?  Anyway, I tried some of her soup and I liked it.  Usually I find coconut milk based soups too thick, they coat the inside of your mouth with an oily feeling, but this had the flavor of the milk, but the consistency of the broth was thin and pleasant, and there was a strong spice flavor.  I thought it was very good. 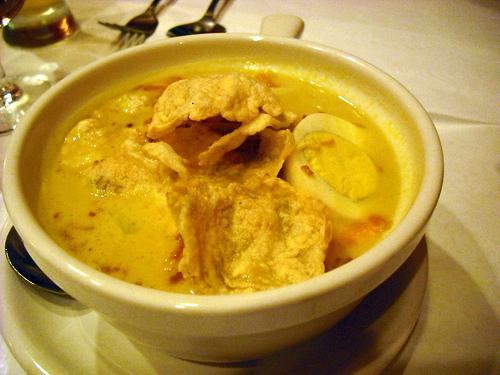 Finally we come to the most exciting thing about Indonesia Restaurant: dessert. 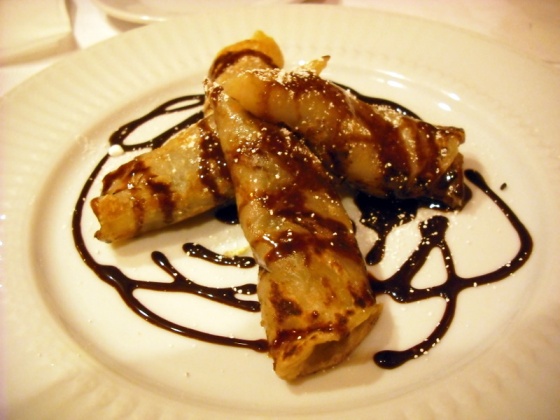 This chocolate roti is probably one of the most indulgent desserts ever.  I’ve had roti at Thai places before, but usually just plain or with a fruit sauce, never with chocolate.  This was so good, kind of like a chocolate croissant, but if you’d soaked the croissant in condensed milk.  Crazy, and again, very pretty.  This is the kind of thing I could eat until I made myself sick.  Is that oversharing?

So I liked Indonesia Restaurant, it was a pleasant space with nice people and pretty tasty food.  I’m definitely intrigued enough to want to go back, there are so many dishes on the menu I’ve never tried before, and this meal was a good indication that if I do try them I’ll enjoy them.

Looking for a specific restaurant or cuisine? Find it here!