Before my breakfast at Delany’s I knew it just as “that place that NEVER has any people in it.  EVER.”  Steve swore up and down that it was perpetually empty, and I believed him because the few times I noticed it as I walked by it was vacant.  We wondered when it would close and how it was still open.  I have to admit, we weren’t too nice about it.  Probably we were a little cruel.  And you’d think that by now I’d have learned not to judge.

Delany’s was nice inside, though spare.  Until you looked up.

Then it was pretty festive.  It was bright with sunlight, which I like, especially at breakfast time.  We were the only people in the restaurant when we sat down.  A group of three frat-esque guys came in after we’d been there about 20 minutes.  Here’s the thing about Delany’s:  we waited for our food for a long long long time.  We had the time, but if you’re looking for a quick in and out bite, this is not the place for you.  Luckily the coffee was good.

The reason for the long wait for our food may have been because we ordered off the menu of Bolivian specials.  They had some tasty sounding omelets and scrambles at very reasonable prices, but the Bolivian specials were too exciting to pass up, even though they were twice the price of anything on the normal breakfast menu. 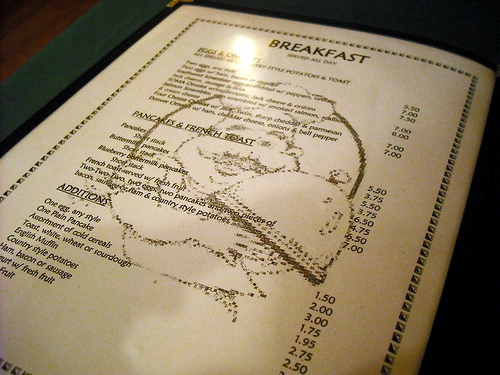 I was tempted by the Asado Especial, but I figured I didn’t need to eat rice AND french fries.  So I went with the equally enticingly described Silpancho.

I am a pretty adventurous eater, but one of the things I get a little weird about it blood sausage.  I was surprised when I really enjoyed the Morcilla; it was super rich and creamy, with warm spices like cinammon and cumin.  It was delicious smeared on the french fries, which were golden and crisp on the outside and moist on the inside.  The salad was lovely as well, fresh and brightly dressed with a simple vinagrette.  We were both surprised by the salad, we didn’t expect such fresh greens at a place that seemed to have no customers. 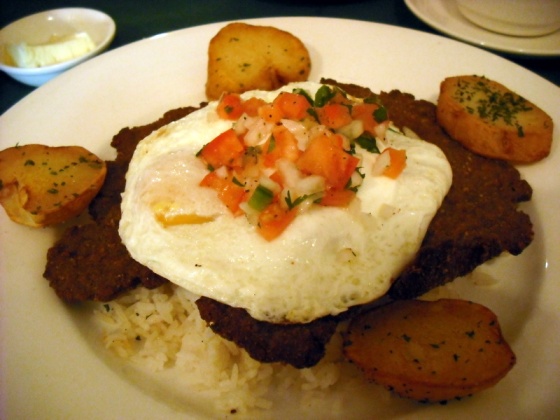 Steve’s meal looked pretty, but I think it was my dish that really impressed us with its presentation.  It certainly wasn’t what you’d expect at a restaurant that’s empty all the time.  It made me feel kind of bad that these people are putting so much work and thought into their cooking without much reward.  Still, the silpancho didn’t quite live up to its looks.  I enjoyed it, the beef was tender and flavorful, the eggs were perfectly cooked and the potatoes were light.  The little scoop of salsa that topped it was a bit bland, and I really wished that I’d had a lemon wedge or something acid to balance out the richness of the egg and beef and the blandness of the rice.  I was offered tabasco, which added a bit of heat but just wasn’t the right flavor.  So, not a perfect dish, but easily fixed.

Delany’s is a tiny operation.  When I was there I saw three people; a waitress/chef, a teenager who helped a bit with waiting tables but mostly looked at a laptop at a back table, and another chef that I only glimpsed in the kitchen.  I’m pretty certain they were the only folks working there.  While Steve and I were waiting for our food, we could hear chopping and pounding and sizzling coming from the kitchen.  I think Delany’s could be doing a lot more business, they aren’t in the greatest location, but they are just a few doors down from the behemoth that is Brenda’s.  I’d think that they could be taking more of that overflow.  I think the main problem is that they aren’t advertising their Bolivian food.  There aren’t too many places in San Francisco serving Bolivian food and it seems to be a pretty interesting cuisine.  If they made that more of a focus of their outside presentation,  I think they could draw more people in.  I could be totally off base though; for all I know Delany’s is super busy during weekday lunches.  Several people on Yelp mentioned that they have live music on weekend nights.  I’d be interested to see that.  I’m also interested to come back and try the American/Italian food on their dinner menu, as well as more Bolivian food.  So, I hope they stay open for a while. 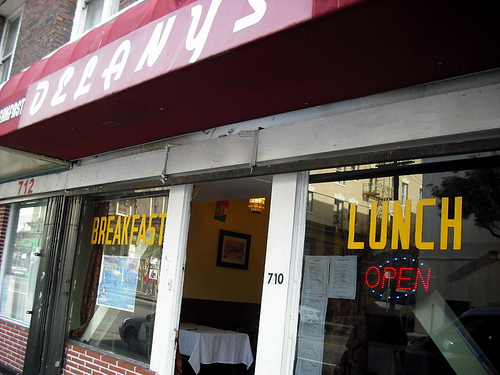 I pretty much need to have coffee in the morning.  This isn’t really a problem on work days, there are a gazillion and one starbucks and peets and donut shops within walking distance of my office, and I keep a french press at my desk.  The weekend is when this can get tricky.  Usually I just order a cup at whichever restaurant I eat breakfast/brunch/lunch (depending on how late I sleep).  There are some days though where various elements conspire to make it difficult for me to caffeinate myself, and then I get a little, shall we say, grumpy.  I was having one of those mornings the other day, when Steve and I were going out of town for some reason or other.  We were going to be riding our bikes down to the BART station.  In the old days, before bikes, we would have walked down to the station and I would have picked up a coffee somewhere along the way.  This was no longer an option, so I needed to figure something else out.  I had grown a bit tired with my usual coffee spot, the gelato place about a block from my house.  Their americanos were nice, but the service could be slow, and I needed food with my coffee.  That’s my other problem, I can’t drink coffee on an empty stomach.  They have some middling pastries at the gelato place, and they make crepes and bagels, but as I mentioned, the wait can be painfully long.  I didn’t have a lot of time because I had to eat and finish my coffee before we had to leave in about 30 minutes.  I decided to head down the hill to the next closest coffee shop, What A Grind.

I’m friendly with two of my fellow tenants in my apartment building, and one of them told me a few months ago that What A Grind has the best coffee in San Francisco.  I was pretty skeptical about that; I’d waited at the bus stop in front of the cafe almost everyday for 2 years and I saw the volume of business they were doing.  If this place really had the best coffee in San Francisco some hipster would have found it out and it would have grungy kids queuing down the block.  Mostly the customers are burnouts and old Chinese guys from the neighborhood.  The place definitely inspires a fierce loyalty among some, I saw the same faces there the Sunday I stopped by that I’d been seeing every weekday morning for so long.

I went inside and ordered a regular coffee and an everything bagel with ham, cheese and egg.  The interior was not at all what I expected, it was much brighter and filled with odd knick-knacks and framed photos.  There was a life size painting of Marilyn Monroe on one wall.  The small dining area, off to the right of the small entryway room that housed the counter and the kitchen, was homey with mismatched chairs and tables and potted plants.  I watched as Sam, the proprietor, who I recognized from my bus stop days, put my bagel on the toaster and sliced pressed ham on a meat slicer.  My breakfast sandwich was about 4 bucks, which is just a little cheaper than the non-breakfast sandwiches they offer.  They also have some deli salads that didn’t look bad at all.  I’m thinking this could be a decent place for a quick, cheap lunch. 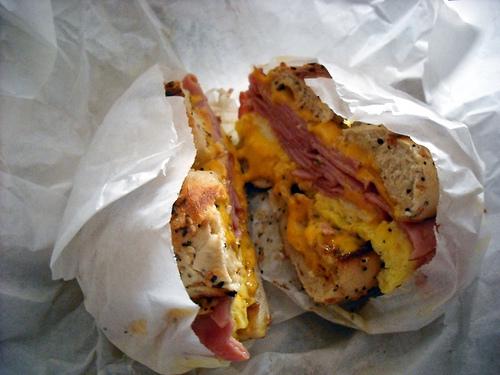 That is, if my bagel is any indication.  I was put off a bit by the amount of liquid that came off the bagel, I’m not sure why it was so wet.  I mean, I guess it must be from the ham but it was a serious amount of juice.  It did not seem proportional to the amount of filling.  Beyond that initial weirdness, it was a pretty good breakfast sandwich.  The egg was fine for microwave cooked egg, the ham was standard, pretty salty but good.  The cheese was American, but I’m ok with that on a hot sandwich because American cheese has a pretty superior melt-ability.  The bagel was toasted enough that there was a crackly crust on the cut sides and the outside.  When I have a toasted bagel I want a well toasted bagel.  If I were to grab breakfast at What a Grind again, I’d probably get a bagel with cream cheese or tomato or something, because those bagels are pretty cheap at $1.50 and, though I found my sandwich quite satisfying, it probably wasn’t $4 worth of satisfying.

Oh, and the coffee?  Not the best in San Francisco, sorry.  I knew you were hoping I’d be the hipster who discovered the diamond in the rough, but it’s not to be.  It was pretty good though.

Oh, something really cool about this place is that it’s in the same building as the apartment that Dashiell Hammett lived in while he was writing The Maltese Falcon, among other stories.  There’s a plaque on the wall near the gated entrance where you can read a bit more about it.  Neat, huh?  You can also check out this site for a photo tour of the building and apartment.

Looking for a specific restaurant or cuisine? Find it here!